Don’t get me wrong – I don’t want carcinogens in any products. But I sure as heck don’t want them in products I use on the most absorptive skin on my body.

The cancer-causing chemical in question here is styrene, which was just inducted into the toxic chemical hall of shame – and let’s be clear, with all the toxic chemicals out there vying to get into the hall of shame, this is a pretty big accomplishment. After all, it’s really hard for us to be able to say, “this chemical causes cancer.” The scientific community requires a LOT of research and a LOT of evidence before we can move beyond the precautionary phrases of “linked to,” “potentially causes,” and “might be.”

And for a government agency to come out and say a chemical causes cancer… well, that’s when you know it’s serious.

In 2011, the National Toxicology Program, a collaboration of scientists from several government agencies, reported that styrene is “reasonably anticipated to be a human carcinogen” as part of their Report on Carcinogens. The styrene industry didn’t much like that decision, and lobbied hard to get the National Academy of Science to look at the data again in hopes of a more industry-friendly conclusion. Turns out they should have been careful what they asked for. Just a month and half ago in July, the National Academy of Science completed their re-analysis and fully confirmed that styrene is a cancer-causing chemical.

So what does this have to do with feminine products, you might be wondering. Well, guess what we found on Procter & Gamble’s (maker of the top-selling Tampax and Always brands) list of commonly-used fragrance ingredients? Styrene.

No problem, you say, I’ll just read the label to avoid it in all of the scented Tampax and Always products!

Sorry, no dice. The problem with this list of fragrance ingredients is that P&G doesn’t tell you which fragrance chemicals are in which products. All this list tells you is that styrene could be in any of the scented products that P&G makes, including Tampax and Always, but they don’t give you the information you need to avoid it.

So, in essence, P&G is asking you to play Russian Roulette with your ladyparts.

This is absolutely unacceptable, for two reasons: 1) Cancer-causing chemicals simply should not be listed as a commonly-used ingredient by any consumer product company; and 2) We have a right to know what we’re using on and in our bodies, especially when it comes to toxic chemicals.

And if you haven’t yet, watch and share our hilarious spoof video Detox the Box! 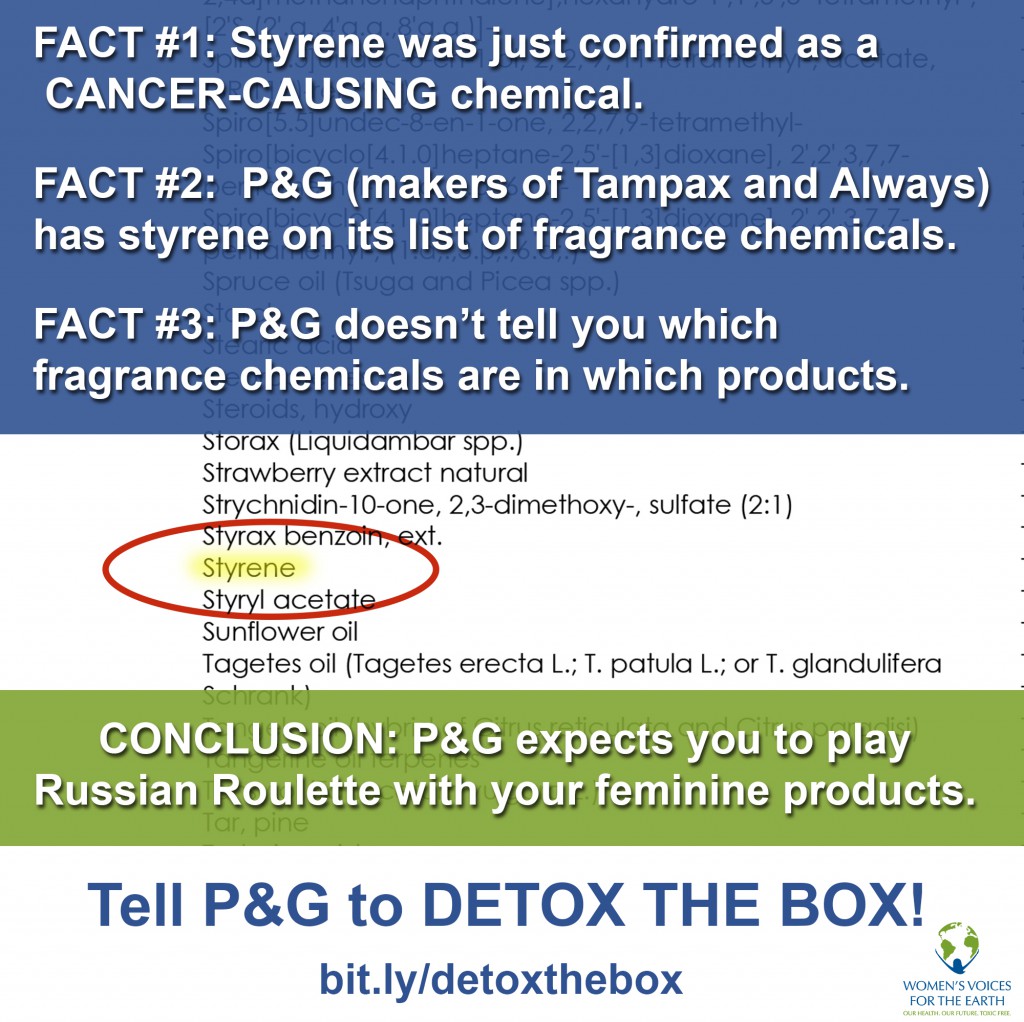