MISSOULA, MT — Today, national women’s health organization, Women’s Voices for the Earth (WVE), released a series of parody ads that take on toxic chemicals in feminine wipes and the body-shaming marketing used to sell these products to women.

This video series is the launching platform of WVE’s new campaign, Summer’s Deceive, targeting one of the world’s leading brands in feminine hygiene — Summer’s Eve — whose product line includes feminine wipes, vaginal douches, feminine sprays and feminine washes. The use of feminine wipes is on the rise thanks to stepped up marketing by companies, making this a critical moment for the makers of Summer’s Eve to lead the industry to eliminate toxic chemicals and disclose all ingredients, including fragrance and odor-fighting chemicals.

“Summer’s Eve markets feminine wipes to women as a ‘must-have’ for both health and self-image. But of course, the blatant message of this marketing is that vaginas are dirty,” said Erin Switalski, executive director of WVE. “Not only is this absurd — but when products marketed for vaginal health actually contain chemicals that are putting women’s health at risk — this is dangerous. This is wrong. And women are tired of it.”

With tag lines like “hiding toxic chemicals linked to allergies, fertility issues and cancer just got a whole lot more convenient,” the spoof ads use humor and satire to call attention to the chemicals found in many Summer’s Eve wipes.

One chemical of particular concern is octoxynol-9. This chemical is a potent contraceptive drug that effectively kills sperm. However, wipes containing octoxynol-9 are not considered contraceptives, nor are they required to have any caution labeling to their potential effect on a woman’s fertility.

“It is inexcusable that a product designed specifically for vaginal use — and marketed for vaginal care — could negatively impact a woman’s reproductive health,” said Switalski.

The Food and Drug Administration (FDA) classifies most feminine care products as “cosmetics”. Yet, under current law, FDA does not approve cosmetics, or require testing to determine their safety. Instead it is the voluntary responsibility of cosmetic manufacturers to ensure, before marketing their products, that the products are safe.

The fact that manufacturers are putting a chemical like octoxynol-9 into feminine care products illustrates the need for greater research, attention and scrutiny from the FDA regarding chemicals used in products that come in contact with one of the most sensitive and absorbent parts of a woman’s body.

Women of color are disproportionately impacted by the harmful and unwanted chemicals in feminine wipes. Data compiled by the National Health and Nutrition Examination Survey (NHANES) indicate that Black and Latina women use wipes, douches, washes, and sprays at higher rates than white women. Companies continue to market feminine products more aggressively to women of color, putting their health at heightened risk of toxic exposures and adverse long-term health impacts.

“We’re living in a time when world leaders think it’s ok to grab women by their private parts,” said Tenya Steele, Director of Environmental Health for WE ACT for Environmental Justice. “Unfortunately there’s already an unforeseen ‘grabbing’ of women’s private parts every day when companies are allowed to target women’s reproductive organs with a slew of toxic, health-damaging chemicals in products that they falsely deem necessary and safe. As usual, African American and minority women are on the front lines of these attacks. The unfair targeting of vulnerable populations by brands like Summer’s Eve puts black lives, black babies, and black vaginas at the bulls eye of their toxic target with detrimental effects. It’s time to Detox the Box!”

A recent study identified disproportionate health risks to Black women due to higher exposure to chemicals in vaginal douches. In fact, Black women had phthalate levels that were 48% higher than white women. Phthalates are chemicals of high concern to women’s health, because they are hormone disruptors that are also linked to reproductive and developmental harm. Phthalates are often used as ingredients in fragrance, which companies are not required to disclose to consumers.

“Historically, women of color have been harmed by the health care system and exploited by marketing strategies that tell us we have to change or that we are not powerful and beautiful just as we are,” said Cristina Aguilar, Executive Director of Colorado Organization for Latina Opportunity and Reproductive Rights (COLOR). “We will not stand by as products are pushed on us that perpetuate this stigma and negatively impact our health. We’re especially concerned about feminine wipes as Black women and Latinas tend to be greater users of these products.”

Because fragrance and odor-control ingredients in Summer’s Eve feminine wipes remain secret, they represent an unaddressed health risk to women who use these products, particularly women of color.

The Summer’s Deceive campaign marks the latest escalation of Women’s Voices for the Earth’s campaign for safe feminine care products. Launched in 2013 with the report, Chem Fatale, WVE’s work has helped elevate the topic of period health into the public mainstream.

About Women’s Voices for the Earth
Founded in 1995, Women’s Voices for the Earth amplifies women’s voices to eliminate the toxic chemicals that harm our health and communities. WVE has published various resources on toxic chemicals and feminine care products, including recent fact sheets on feminine wipes, lubricants and their ground-breaking report, Chem Fatale. www.womensvoices.org

VICTORY for Your Right to Know!

An Important Note on the Term “Feminine Care”

Many of WVE’s materials contain the word “feminine” when used to describe period and other personal care products like wipes, washes, douches and sprays — this is a term which has traditionally dominated the menstrual products industry. But we know that words matter, and by using the term “feminine” we push people out of the conversation. There are people who use these items who do not identify as women. The experiences of transgender or gender nonconforming people are valid and their needs are critical to our mission of building healthier communities. We hope you will notice that moving forward we will be more mindful in how we talk about who is impacted by these products and by our work.

What’s in Period Products? A Timeline of Chemical Testing 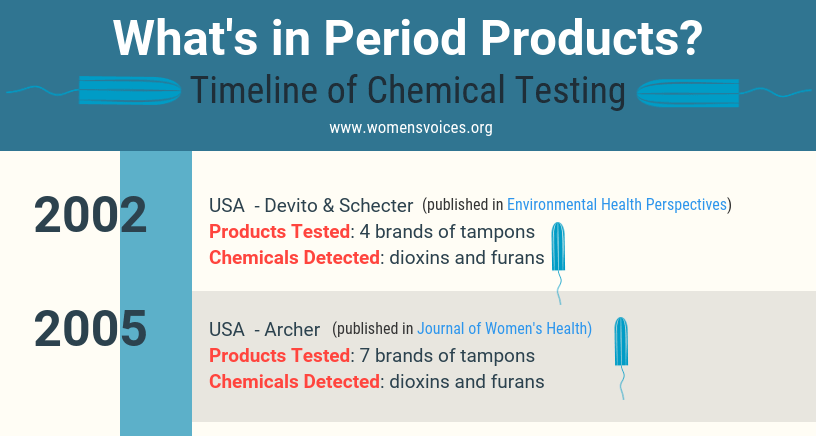 While a few studies have attempted to assess and measure potential risks of these products, all have indicated that there is more work to be done to better understand the impacts these products may have on our health. Learn more.

Whether you use vaginal douching products or not, this important first-of-its-kind study reaffirms the need for more research into this unique and sensitive route of exposure for women. Learn more.