UPDATE (2.13.17): We are happy to report that because of you, Unilever has committed to start disclosing fragrance chemicals in their personal care products.
Learn more

Eighteen year old Brandon Silk and countless others like him suffer serious, sometimes deadly, reactions to the secret ingredients in fragranced cosmetics and personal care products. In Brandon’s case his mom, Rosa, reports for the last eight years she has been struggling to keep her son, an otherwise happy and healthy young man, in school and out of hospital emergency rooms to protect him from a severe, life-threatening allergy to one or more of the fragrance ingredients used in Axe Body Spray. Unilever the manufacturer of Axe Body Products refuses to disclose this vital information.

Join us, Rosa and our partners at the Breast Cancer Fund and the Campaign for Safe Cosmetics in calling on Unilever to disclose the fragrance ingredients in Axe Body Spray and other Unilever products! TAKE ACTION!

Dear Axe Body Spray, My Son’s Doctors Say Chemicals in Your Product Could Kill Him 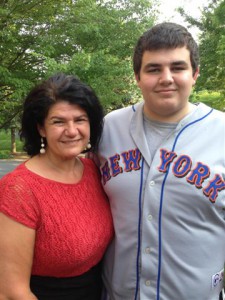 I want to tell you the story of my son’s now eight year long journey, a journey that I anticipate will take many more years.

The youngest of my three children, Brandon, has an unusual medical condition that has greatly affected his life. He has a severe, life-threatening allergy to the chemicals (fragrance) used in Axe Body Spray.

At least we now know the culprit behind Brandon’s reactions. Today, he is 18 years old, but it was back when he was only 10 that he started to get sick at school.

At first it was headaches, but he soon started getting hives on his face and arms and had trouble breathing. One dreadful day, he went into anaphylactic shock. We were rudely awakened to the fact that there was something seriously wrong.

Brandon spent days in the hospital as doctors tried to figure out what caused this reaction. No one knew. They asked so many questions – and eventually concluded that he had been exposed to something airborne.

Armed with this information, I had many questions for the school: did they spray something, exterminate pests, or paint? Had something gone on in school that day that was different from any other day? I wanted to know anything that could help us find a resolution. My questions went on and on, but the answers were always the same: nothing had changed at school that may have caused Brandon’s reaction.

I did not want my son to be exposed to something that could kill him. I was at my wits end, but at the same time hoped it was just some sort of fluke.

As Brandon continued to attend classes, we quickly noticed a pattern. He was fine at home, but at school he would get sick – headaches, trouble breathing, welts on his face and arms, blurred vision and stomach pains. His health was compromised to the point that he had to be kept at home for weeks at a time before returning to his classes.

When he would return, the nurse’s office became a routine part of Brandon’s day. His reactions continued to worsen. The school nurse had to administer a life-saving dose of epinephrine before he was taken by ambulance to the hospital. By simply going to school his life was in jeopardy.

Years were passing, and we still could not figure out what was causing Brandon’s health to deteriorate. By a small miracle, during the last year of middle school, Brandon recognized a scent in the hall, wafting from a group of boys (he was coming back to school after several weeks of homeschooling). As he inhaled, his throat started to close and he quickly realized that it was this scent that was the cause. Before running into the nurse’s office he had the presence of mind to ask the boys what the scent was– and that’s where our journey began.

A challenge test done at the Children’s Hospital of Philadelphia later confirmed the reactions were being triggered by something in Axe Body Spray.

Since then, I have reached out to everyone that I could, including top-notch experts, hospitals, doctors and specialists in the field. Their only suggestion was to avoid the trigger. But Axe Body Spray is a very popular product among teenage boys. How can my son avoid something that is so frequently in the air around him?

The worst part is that by law, I am not allowed to know what chemicals my son has been exposed to. These ingredients are considered “proprietary” to the manufacturer. How can I not be allowed to know? Do commercial interests trump my child’s health? How can I be an advocate for my son when I don’t know what I am advocating against?

Every one of Brandon’s doctors had to sign a medical gag order to review the list of ingredients from the manufacturer, but still, there are no tests for these chemicals. So I may never know the specific chemicals that trigger my son’s anaphylaxis. I struggle every day with this. I am currently seeking the help of an expert at Yale Medical School, Dr. Carrie Redlich, who is evaluating Brandon after reviewing the list of hidden chemicals.

These fragranced products are considered an environmental and occupational hazard. Our kids are not working at a manufacturing plant. They are simply going to school. Why should a child, or anyone, ever have to go through this?

I have also pressured politicians to help me. There is now a bill that is sitting in the Pennsylvania House of Representatives, introduced by Representative Marcia Hahn, called the Fragrance Free Schools Act (HB1955). Senator Lisa Boscala also introduced a companion bill in the state Senate (SB1363). The bills are definitely an exciting step in the right direction, but so many questions remain. Will they pass? Will they be properly enforced? What will it take to protect children like my son and other students who unknowingly get sick from the air in their schools?

Brandon can no longer go to school because of chemicals he gets exposed to – doctors say they could kill him. For years, he switched between homeschooling and attending classes, but now he can’t go at all because the allergy has become so severe. Every day he asks “when can I be with my friends?” He knows that walking into that building would mean another trip to the hospital.  He’s tried to have a normal childhood, but to no avail. The school attempted to convince the student population to refrain from wearing Axe, but they are just kids and that did not work. So it’s up to us, the adults to protect them.

My son just wanted to be a regular kid. School was supposed to help him achieve that very reasonable goal, but instead, he has been robbed of his health.

When Brandon was 10 years old, I packed his lunch, put him on the school bus, and a child was spraying Axe Body Spray in his class. That fateful day, eight years ago, changed my Brandon’s health and life forever.

We must think about the air our children are breathing at school.  We must encourage schools to be fragrance-free. Not only to protect Brandon, but all children from harmful chemicals that so innocently hide behind the catchall term “fragrance.”  We need federal legislation that requires beauty product manufacturers to fully disclose all of the ingredients in their products – including fragrance ingredients — so that no other child needs to suffer as Brandon has. A list of “proprietary ingredients” should not come before our children’s health… ever.

My son is one of the strongest people I know.  I often wonder how and when this journey will end. I do know one thing though. I am in it, with him, to win it.