A new report found 67% of nearly 200 food cans from dozens of brands and retailers tested positive for the toxic chemical Bisphenol A (BPA). In the report, Buyer Beware: Toxic BPA and regrettable substitutes found in the linings of canned food, every single one of the Campbell’s Soup cans analyzed tested positive for BPA, and 62% of Kroger’s did as well. Learn more below and take action today!

Remember a few years ago when news spread about the chemical bisphenol-A (BPA) being used in plastic baby bottles, pacifiers and sippy cups? There was mounting evidence that BPA could cause behavioral changes in infants and children and trigger the early onset of puberty in females. At that time, many retailers quickly pulled those items from store shelves – even giant companies like Walmart.

Unfortunately, chemical industry lobbyists have kept BPA from being banned in the US. That means it’s still in many everyday products. Today a shocking 93% of American have measurable levels of BPA in our bodies, which suggests that we are being exposed to this chemical repeatedly. And over the past few years, hundreds of studies have linked even very small amounts of BPA to breast and prostate cancer, infertility, type-2 diabetes, obesity, asthma, and behavioral changes including attention deficit disorder.

One place BPA is still widely used is in food packaging, especially as a liner in canned foods. Of course we expect the food we buy to be safe for our families – but BPA can actually leach out of can liners, into the food itself. The good news is some food companies have already pledged to eliminate BPA. The bad news is it’s a minority of canned food producers. The worse news is, not all of the “BPA free” companies have explained what chemicals they will be using instead. Some of the substitutes could be even worse.

So how do we really know what’s in the cans that Americans eat from every day? 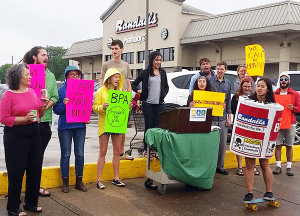 To help answer that question, we bought cans of Randalls private label brand tomatoes and kidney beans to have the liners tested as part of a national study. The cans and lids for both products came out positive for BPA, as did two-thirds of all the nearly 200 cans tested from across North America. The big take-away from this study is clear: most of our canned food in North America still comes with BPA liners. When this national report was released on March 30, we held actions outside an Austin Randalls and Dallas Kroger. This national campaign is sending a message to retailers and food manufacturers that BPA and other toxic chemicals such as polyvinyl chloride and polystyrene should not be used in can liners.

Another organization working on this issue, Breast Cancer Fund, gave food giant Campbells a heads up that 100% of their cans tested had BPA – despite the fact that Campbells had promised to phase out BPA in can liners back in 2012. Obviously they hadn’t followed through on that pledge. In response, two days before the report was released, Campbells announced it would remove BPA from its cans by mid-2017. Will Campbells keep its latest promise? Will Campbells and other brands guarantee with rigorous scientific testing that the new can liners are not “regrettable substitutes,” but are truly safer for our health? Will major grocery stores work with food suppliers to eliminate BPA in all canned foods moving forward?

The answer largely depends on whether all of us keep the pressure on Randalls, Krogers, Walmart, dollar stores, Campbells and other brands to make food packaging safe. You can take action here: www.toxicfoodcans.org