Okay, I’ll admit it. When I first saw Always’ new #LikeAGirl ad, I was impressed. It has such a great message about women’s empowerment and taking back the idea of what it means to do things “like a girl”: strong, determined, smart, and formidable.

And then I got angry. Because this is an incredibly hypocritical message coming from a company that keeps all of its ingredients secret, which actually takes away women’s power to make informed choices about our health.

When it comes to toxic chemicals, choices about feminine products might be some of the most important ones we make, because the skin in and around women’s vaginas is some of the most absorptive and sensitive skin on the body.

Let me give you an example to bring this home. Doctors are increasingly administering hormone treatments vaginally because they result in 10-80 times higher levels in your body than if you took the same dose in pill form. Now, are you sitting down? Because our Chem Fatale report found that hormone disruptors are common ingredients in feminine products that women use–yep–on their vaginas.

So you can bet that women want to know what’s in the pads we’re using down there for several days at a time on a monthly basis. Our health depends on it. But you won’t find a single ingredient on an Always label.

There are lots of women out there who don’t think that this is okay. Over the last few months, more than 20,000 women have contacted the company asking for ingredient disclosure so that they can make informed choices.

Unfortunately, Always has completely ignored those thousands of women who have reached out to them asking for greater transparency and safer products. How’s that for celebrating women’s “empowerment”?

So what’s Always hiding in those pads? 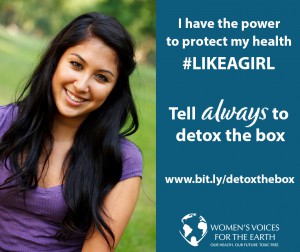 Well, we can guess at a couple of things. Studies link menstrual pad use to vulvar allergic rash in some women. Both adhesive chemicals like methyldibromo glutaronitrile and fragrances used in pads have been identified as causes of these allergic rashes—but because Always doesn’t list ingredients, women can’t avoid these chemicals if they choose to.

We also know that Procter & Gamble (makers of Always and Tampax) uses harmful chemicals like styrene, pyridine and methyleugenol (linked to cancer) and synthetic musks like galaxolide and tonalide (potential hormone disruptors linked to increased risk of breast cancer) in their fragrances. And—you guessed it—because Always keeps ingredients secret, women don’t have the power to avoid these either.

It’s no secret that women make almost 85% of consumer decisions, which adds up to a lot of power in the marketplace. Over the last year, women’s economic power has convinced:

That’s a serious track record for women’s power. We protect our health, and we stand up to companies that endanger it, like a girl.

And guess what, Always. Women make 100% of consumer decisions when it comes to pads. That’s a MASSIVE amount of economic power to convince a major company that we won’t stand for secret toxic chemicals in products meant for the most absorbent skin on our bodies. And you can bet we’re going to use that economic power. Like a girl.

We’ll admit it, the #LikeAGirl concept was genius. But, come on Always, you can do better–we need you to actually stand behind that concept, and act like you mean it.

Looking for safer brands to use in the meantime? Check out our No Secrets feminine care companies!