Hundreds of grandmothers, mothers, sisters, and daughters are affected by mesothelioma each year. Mesothelioma is an aggressive, rare cancer that is linked to asbestos exposure. Men are statistically more likely to develop this disease, but that does not mean women should not be just as aware of its detrimental effects.

Women are at a lower risk for developing mesothelioma, not because they are less genetically pre-disposed to the disease, but because it is usually linked to occupational exposure, and men made up the majority of the workforce during the 20th century, when asbestos use was at its highest.

Asbestos is a mineral known for its strength and heat-resistant properties. It was once used extensively in commercial and home construction, textiles and throughout all branches of the military. When asbestos products become worn over time, the fibers can become airborne. When these fibers are inhaled or ingested, they can build up and cause mesothelioma decades after exposure.

Approximately 3,000 new cases of mesothelioma are diagnosed in the United States each year. Mesothelioma has historically affected three to four times as many men than women, yet there are studies that examine the relationship between women and mesothelioma.

Women usually have the same treatment options as men — surgery, chemotherapy and/or radiation — but on average, women have a better prognosis because treatment proves more effective for them. In a recent study, doctors observed 702 people with the same type of mesothelioma and found that women lived significantly longer than men after surgery.

How Women Are Exposed

While exposure to asbestos is much less common today than 30 years ago, women faced an increased risk for secondary exposure to the harmful substance when it was widely used between the 1930s and 1970s.

Tiny, jagged asbestos fibers easily attached to clothing of workers who were constantly exposed to asbestos on the job. When the workers’ clothes were worn home and washed, women in the home were exposed.

If the worker sat down at home before taking off their work clothes, the furniture was also a likely source for secondary exposure. Even a simple hug could be the cause of secondary exposure, as asbestos fibers easily attach to the skin, hair or clothes of anyone exposed on the job.

As World War II began, some women joined the workforce to provide support to the military. As a result, women may have been exposed to asbestos in shipyards or factories, but this source of exposure was much less common for women than secondary exposure. 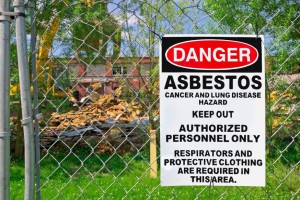 Despite mounting scientific evidence of the fatal effects of asbestos exposure, the toxic mineral remains in use today.

The EPA has created some regulations against asbestos, but the manufacturing and distribution of many asbestos-containing materials, including clothing, roofing felt, vinyl floor tile, cement shingle, millboard and roof coatings, are not banned in the U.S.

To ensure safety from asbestos and its related conditions, government mandates and public awareness are essential.