A huge thank you to Clean & Healthy New York for providing this great information about how state actions are still incredibly important, even with the recent passing of the new federal Toxic Substances Control Act reform – the Frank R. Lautenberg Chemical Safety for the 21st Century Act. In short, states still have the right to act under the new law. Read on…

In June, revisions to the toothless 1976 Toxic Substances Control Act were signed into law. On balance, it contains some improvements to the outdated law, but does not solve the problem of toxic chemicals in commerce in any comprehensive way.

Under the new law, EPA will finally begin assessing chemicals in a systematic way, and determining what, if any, actions are required to protect human health and the environment. In the next 30 years, at the pace dictated in the bill, EPA is expected to assess and take action on about 75 chemicals. However, at that pace, it will take the agency 1,200 years just to assess the 3,000+ “high production volume” chemicals. There is credible scientific evidence about harm caused by roughly 2,000 chemicals.

So, in 30 years, an estimated 3.75% of the chemicals that we know can cause harm will have been reviewed and acted on by EPA. (It’s also less than 0.1% of the 80,000+ chemicals on the market). And that’s only if this program is fully funded and doesn’t get bogged down in lawsuits over proposed actions. 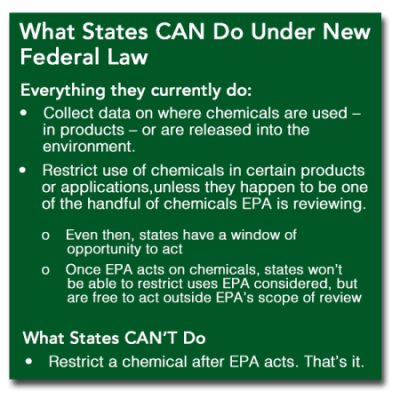 That leaves over 1,900 chemicals for which we now have credible scientific evidence of harm unaddressed for a generation.

Further, EPA will be extremely limited in their ability to act on imported products (the vast majority of what’s for sale today), and jurisdiction doesn’t cover food packaging or cosmetics.

States can and must step into this vast breach to protect their residents and environment.

It is vital for states to continue its leadership on addressing toxics:

No one can credibly argue that the new law takes the place of state chemical regulatory activity. Special interests will be peddling that line in state capitols but we know that those claims are false. The pace of chemical reviews will simply be too slow to make that claim stick. TSCA reform is finally here and it falls demonstrably short of what’s needed to fully protect public health and the environment. Fortunately, the chemical regulatory expertise that states have cultivated will make them a worthy partner in protecting kids and other vulnerable populations. Your service at the state level is still critical. That sound you’re hearing is not the buzzer, but the opening bell.

* Assumes 10 chemicals every 4 years, the timeframe spelled out in the bill. Assumes no legal disputes (highly unlikely) after decisions are final.
** Additional chemical calculations assume EPA acts on 10 chemicals each year for 30 years (a very generous assumption.)