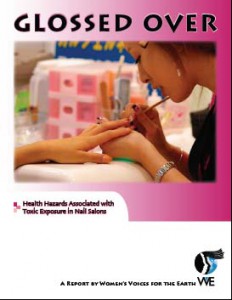 These demographic trends in the industry have profound impacts. For one, women of childbearing age, are especially vulnerable to even low levels of toxic exposure, due to the potential impacts on a developing child. Many technicians are also at risk due to the common problem of a language barrier. Women do not have to be fluent in English to become licensed technicians, yet important safety information is usually not available in the language they can read. This is especially true among the Vietnamese population.

Toxic Hazards in the Nail Salon

Toluene is a clear colorless liquid that acts as a solvent. It is found in many nail products, as it helps suspend the pigment throughout the liquid and helps form the smooth finish across the nail. Toluene is volatile and evaporates into the air as nail polish dries. Exposure to toluene can affect the central nervous system with low level symptoms such as headache, dizziness, and fatigue. Toluene is also an irritant to the eyes, nose and throat.

Formaldehyde is an odiferous chemical commonly used in resins and as a preservative. It is found in some nail products as a nail hardener and to help create a smooth finish. Formaldehyde is an irritant to the eyes, nose and throat, and exposure can lead to coughing and wheezing. Repeated skin exposure can lead to skin irritation and an allergic rash called dermatitis. It is also a known human carcinogen.5 People are exposed to formaldehyde by breathing it in, although it can also be absorbed through the skin.

Dibutyl phthalate (DBP) is a chemical used in a variety of consumer products as a plasticizer. In personal care products it adds flexibility, a moisturizing sheen and helps dissolve other cosmetic ingredients. It has been commonly found in nail polish. DBP is a possible reproductive or developmental toxin. Phthalate exposure occurs through inhalation, absorption through skin and ingestion in food.

Other Toxic Compounds. A myriad of other toxic compounds are associated with nail salons. Several strong solvents such as acetone and alcohols are used to remove nail polish. Exposure to these solvents can lead to nose, throat, lung, skin and eye irritation, as well as headaches, dizziness and confusion. Acrylic nail application leads to exposure to nail dusts and acrylic polymers such as methyl methylacrylate (MMA) and ethyl methylacrylate (EMA). The FDA restricted the use of 100 percent MMA in nail products in the U.S. in 1974 due to its toxicity. It was replaced by the less toxic EMA. Anecdotal reports indicate that MMA may still be in use in some salons as it is a significantly less expensive chemical.7 Both EMA and MMA have a very strong odor even at low concentrations and are irritating to the eyes and respiratory system. They are also sensitizers, which means that people exposed over time can become allergic with reactions that include asthma and dermatitis.