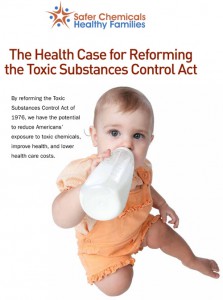 There is growing agreement across the political spectrum that the Toxic Substances Control Act (TSCA) of 1976 does not adequately protect Americans from toxic chemicals. In the 34 years since TSCA was enacted, the EPA has been able to require testing on just 200 of the more than 80,000 chemicals produced and used in the U.S., and just five chemicals have been regulated under this law. Environmental Protection Agency (EPA) Administrator Lisa Jackson has asked Congress to provide her agency with better chemical management tools for safeguarding our nation’s health.[1]

Much has changed since TSCA became law more than 30 years ago. Scientists have developed a more refined understanding of how some chemicals can cause and contribute to serious illness, including cancer, reproductive and developmental disorders, neurologic diseases, and asthma.

The Safer Chemicals, Healthy Families coalition believes that, by reforming TSCA, we can reduce our exposure to toxic chemicals, improve our nation’s health, and lower the cost of health care. This report documents some of the scientific findings and economic analysis underlying our position.

Chronic disease is on the rise

More than 30 years of environmental health studies have led to a growing consensus that chemicals are playing a role in the incidence and prevalence of many diseases and disorders in our country, including:

The health and economic benefits of reforming TSCA

According to the U.S. Centers for Disease Control and Prevention (CDC), 133 million people in the U.S.—almost half of all Americans—are now living with these and other chronic diseases and conditions, which now account for 70% of deaths and 75% of U.S. health care costs.[12]

Estimates of the proportion of the disease burden that can be attributed to chemicals vary widely, ranging from 1% of all disease[13] to 5% of childhood cancer[14] to 10% of diabetes, Parkinson’s disease, and neurodevelopmental deficits[15] to 30% of childhood asthma.[14] Whatever the actual contribution, effective chemical policy reform will incorporate the last 30 years of science to reduce the chemical exposures that contribute to the rising incidence of chronic disease. And any decline in the incidence of chronic diseases can also be expected to bring health care cost savings. Even if chemical policy reform leads to reductions in toxic chemical exposures that translate into just a tenth of one percent reduction of health care costs, it would save the U.S. health care system an estimated $5 billion every year.

The U.S. now spends over $7,000 per person per year directly on health care.[12] This sum does not include the many other kinds of costs, such as the costs of raising a child with a severe learning disability or coping with a young mother’s breast cancer diagnosis. Chemical policy reform holds the promise of reducing the economic, social and personal costs of chronic disease by creating a more healthy future for all Americans.