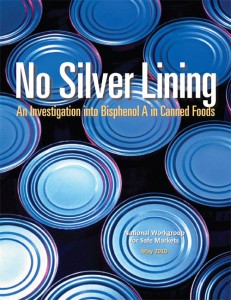 A public health debate is raging around the world about the safety of bisphenol A (BPA). Chemical manufacturing and packaging companies claim BPA is safe and necessary to protect food from metal can corrosion and bacterial contamination.

However, scientists, health professionals, and children’s and environmental health advocates are concerned that hundreds of independent peer-reviewed scientific studies have found negative health outcomes resulting from low doses of BPA.

Canada, Denmark, five U.S. states, three New York State counties, and the city of Chicago have restricted the use of BPA in certain children’s products, like baby bottles and infant formula can linings. Other countries and U.S. states are actively considering BPA restrictions and bans.

This report provides new data about the amount of BPA that could be consumed from eating canned food and drinks available in the U.S. and Canada. For No Silver Lining, we tested the food and beverage contents of 50 cans collected from 19 U.S. states and Ontario, Canada. The report reveals that BPA is a routine contaminant in canned foods. Our study details potential exposure to BPA from not just one can, but from meals prepared with canned food and drink that an ordinary North American person might consume over the course of a day.

It shows that meals involving one or more cans of food can cause a pregnant woman to ingest levels of BPA that have been shown to cause health effects in developing fetuses in laboratory animal studies.

Our findings quantify exposure through only one BPA source–canned foods. Other potential routes of exposure to BPA include air, dust, and water, common products like polycarbonate water and baby bottles, 5-gallon water coolers, and printer inks, toners and thermal receipt paper (used by most gas stations and supermarkets), where BPA can rub off paper onto our hands and into our mouths.

Exposure of animals to low doses of BPA has been linked to cancer, abnormal behavior, diabetes and heart disease, infertility, developmental and reproductive harm, obesity, and early puberty, a known risk factor for breast cancer.

We know exposures to low doses can be harmful, and we know BPA is on our bodies. Independent, peer-reviewed scientific studies have found harm from low doses of BPA occurring at the same or similar levels found in the general population, according to Centers for Disease Control and Prevention (CDC). CDC found BPA in the urine of 93% of the U.S. population. The Environmental Working Group found BPA in the cord blood of newborn babies.