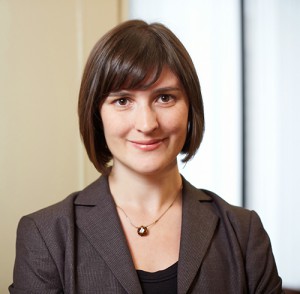 When Sandra Fluke had the courage and passion to testify before Congress on the importance of comprehensive insurance coverage for reproductive health (yes, including birth control), Rush Limbaugh publicly called her a “slut.” Not only are we in awe of Sandra for having the courage to stand up for what she believes in, we’re in awe of her ability to turn that media spotlight from such a hateful incident into a microphone for progressive policies.

Sandra is currently running for the California State Senate. We caught up with her to bask in some of her inspiration, and to bring that inspiration to you this month!

Did you ever think you’d be running for office at age 33? What did you want to be when you grew up, back when you were a kid?

Up until pretty recently, I never considered running for office at any age. For the last decade, I have been focused on a career devoted to the public interest, working on legislative advocacy for many social justice concerns, including gender equity, LGBTQ rights, domestic violence and human trafficking, early childhood education and college affordability, as well as directly representing clients as an attorney.  Unfortunately, I felt, as many people do, that elected office was only for those with personal fortunes and an extensive network of wealthy donors.  After I was thrust into the public spotlight, many people asked me to run for office, and I felt that I needed to honor their request for more young, female, progressive voices in our government.  I believe this is the most effective way that I can continue the work I’ve devoted my career to.  As a child, everyone told me that I should be a lawyer.  I remember considering that as well as being a librarian, a teacher, or a sociologist.

Yours is a household name, and your campaign was recently spotlighted in Vogue. How do you balance your public and private life?

I have tried very hard to protect my family from the spotlight because sometimes they’ve gotten some unwanted attention and safety concerns have been raised. When I found myself with a national platform, I believed it was important to use it to focus on the issues I’ve always fought for, not my personal life. Now that I’m running for office I realize I do have to talk a bit more about myself in addition to the policies I care deeply about. I’ve found that voters really want to understand my values, so that does require sharing more stories, for example, about how my family taught me the importance of giving back to the community. It is still new territory for me and I’m always trying to strike the right balance, but I will say my husband has been such an amazing partner in encouraging me to run and has put incredible effort into my campaign. It has been great having him by my side for this entire journey.

Your opponent, Democrat Ben Allen, also considers himself an environmentalist. Tell us about the differences between the two of you when it comes to protecting women’s health from environmental pollutants and toxic chemicals in particular.

I think in a progressive, coastal area like where I am running for office, many people call themselves environmentalists. But the real question is, are you going to make environmental issues a priority, even when it isn’t the most convenient thing to do, even when the fight gets tough? I know for me, the answer is yes. I’ve been endorsed by the Sierra Club, the California League of Conservation Voters, Ed Begley Jr., the former Chair of the White House Council on Environmental Quality, the Chair of the California Air Resources Board and many others because they know I will be an environmental leader who truly prioritizes the health and safety of everyone in my district.

I have spent much of my career working on women’s health issues and environmental concerns are one of my top priorities, so of course I’m firmly committed to ensuring women’s protection from dangerous levels of exposure to toxins.  As with many medical concerns, we know that women can be differently impacted, including risk of endometriosis, breast cancer, or early menopause.

There are a couple of environmental policy distinctions between me and my opponent. The California Environmental Quality Act (CEQA), is a statute that requires state and local agencies to identify the significant environmental impacts of their actions and to avoid or mitigate those impacts, if feasible. Many developers are opposed to CEQA and believe it needs reform because in some cases, it delays quick development. My opponent is in support of legislative reform to CEQA, whereas I believe that we shouldn’t pursue legislative reform, which could lead to dismantling these incredibly important environmental safeguards.

What advice do you have for women who want to get more involved as advocates in their communities, and maybe even run for office?

There’s no time like the present! We desperately need more women in government, at every single level. People often think of LA and California as being so progressive, and we do have great female leaders on the federal level. But women are so drastically under-represented in LA and in Sacramento. We have exactly one woman elected to the LA City Council, and of our 40 state senators only 12 are women. Those numbers are far worse than they were ten years ago.

As they always say, if you’re not at the table, you’re on the menu. The decisions that are made by legislators at the state and local level often have the most impact on our day-to-day lives. We need to make sure there are more women in those decision-making roles, and we need more women stepping up as advocates to tell their stories. I know it can be intimidating to put yourself out there, and as a candidate I am experiencing those challenges every day, but I take every opportunity to remind women that they are much stronger than they realize. In addition, there are the aspects that I love: meeting voters and hearing about their concerns and dreams for their community. If enough people demand new voices be let into the system we can make the kind of progressive change we’re all fighting for.

California has the most progressive toxic chemical laws in the country, especially Proposition 65, which requires businesses to notify Californians about significant amounts of chemicals in the products they purchase, in their homes or workplaces, or that are released into the environment. That said, what do you see as areas where California could improve?

I’m very proud that California has been a leader for the rest of the country on environmental issues, but we must keep pushing ahead.  There’s so much more to be accomplished.

I believe that global climate change is one of the most critical issues of our time, which is why environmental protection is a top priority of mine. In the State Senate, I will focus on making progress on many environmental issues, including water, transportation and fracking. Given our state’s recent drought, working to solve our water crisis is critical. I will focus on local solutions, including recycling, conservation and recapture. Los Angeles has some of the worst traffic in the country. I will fight for increased investment in public transportation projects to reduce pollution and traffic in our community while creating jobs. We must also protect our coast and communities from fracking and other dangerous drilling practices, including placing an immediate moratorium on fracking.

As an organization that focuses on protecting women workers who often face greater toxic exposure risks than male workers, like women who clean for a living, we’d love to know more about your work on the California Domestic Workers Bill of Rights.

I’m so glad you brought up the Domestic Workers Bill of Rights.  I worked on this legislation with an amazing coalition of workers and advocates for a number of years, and we just celebrated the one year anniversary of it being signed into law in California. Often because domestic work is done by women and in a home, it is somewhat invisible. Domestic workers might be immigrants who don’t speak English and aren’t always able to advocate for worker protections that are afforded to folks who work places like a manufacturing plant. The Domestic Worker Bill of Rights ensured home caregivers do have basic protections like overtime pay, but it did not address the frequent exposure to toxic cleaning chemicals that many domestic workers face, often without adequate protective gear or medical insurance.  In the State Senate, I look forward to further improving our legal protections for all workers handling toxic chemicals.

What else would you like us to know about you and/or your campaign?

I will say one of the surprising challenges of running for office is just how drastic the problem of money in politics is. To get new voices into the political system, we really need to come together and make sure we’re supporting candidates who reflect the values we share. Otherwise we’re going to keep seeing more of the same, and it is really tough to pass progressive policy through a legislature where everyone is indebted to special interests instead of constituents. That is one of the many reasons I have publicly stated I won’t take money from people whose values aren’t in line with my district’s values or best interest, including not taking money from oil companies or traditional utility companies. These are the special interests who halt our progress on environmental legislation, and I think it’s important that a candidate’s values are clear – how a candidate funds their campaign demonstrates that. I’ve been really proud of the campaign I’ve run because my whole team has made such an effort to bring in community