When Women’s Voices for the Earth launched our Safe Cleaning Products Initiative in 2007, no companies were listing ingredients in their cleaners. Not one of them. Not a single ingredient. And companies across industries—cleaning, personal care, feminine care, and beyond—routinely kept fragrance ingredients a secret. They told us fragrance disclosure was impossible because they could never reveal the ingredients that made their products “unique.”

Until now. In an unprecedented move, SC Johnson (Glade, Windex, Pledge) just announced that it would become the first mainstream company to list all fragrance ingredients for each of its cleaning products.

This is a massive victory, a win by women and for women that will make waves across the entire consumer product industry. This victory is a tribute to women’s tremendous economic power to shift companies toward healthier and more transparent products, and ultimately toward a green economy.

Women spoke up for our right to have the information we need to protect our health and our families’ health. And because women make more than 85% of consumer decisions, companies listened.

Why did women fight so passionately on this issue? Studies show that women are greater users of cleaners & fragrances, and secret toxic chemicals in these products are disproportionately harming women’s and girls’ health.

Research indicates certain chemicals in cleaning products can have significant lifelong effects on reproductive health and development, and that hormone disrupting chemicals in fragrance are building up in our blood, breast milk, and even newborns. In addition, women are two to three times more likely than men to suffer from fragrance allergies, and become sensitized much younger than men.

When WVE released our groundbreaking report Household Hazards in 2007, women wondered what they were supposed to clean their homes with that was safe. Our response: until we know what’s in cleaning products, we’ll make our own with non-toxic ingredients like vinegar and baking soda.

We launched the Green Cleaning Party Kit in 2008, and thousands of women all over the country hosted green cleaning parties that were covered in major media outlets like the Los Angeles Times, The New York Times, Good Morning America, The Today Show, Ebony, and Univision.

These women’s refusal to buy mainstream cleaning products without ingredient information played a huge role in convincing giants like Clorox and SC Johnson to begin listing most ingredients in products on their websites a mere six months later. Other companies followed suit and began listing ingredients in their products – except for fragrance, which remained cloaked in secrecy.

A Crack in the Fragrance Armor

In 2010, WVE released What’s That Smell?, a report examining the impacts of undisclosed toxic chemicals in fragranced cleaning products on women’s health, including phthalates, synthetic musks, and allergens. Thousands of women contacted their favorite companies asking for fragrance disclosure. SC Johnson, Clorox, and Procter & Gamble responded by publicly releasing master lists of the fragrance ingredients used to manufacture their scented products, although they wouldn’t tell consumers which fragrance ingredients were in which products.

At the same time, the International Fragrance Association released its own master list of all ingredients used in the entire fragrance industry. A huge crack formed in the fragrance armor.

When WVE released our 2013 report Secret Scents: How Hidden Fragrance Allergens Harm Public Health, women were outraged to learn that companies list fragrance allergens in products sold in the E.U, where it’s required, but not for the exact same products sold in the U.S.

Within a year, Simple Green, Clorox and Reckitt Benckiser (AirWick, Lysol) responded to women’s anger at this double standard by committing to list fragrance allergens on a product-specific basis.

All along, SC Johnson marketed itself as the family company committed to honesty and transparency. It was the company that understood that “You want to know what’s in the products you use around your home and family”—except that it kept fragrance ingredients in its products a secret from its customers. In addition, product test results from WVE’s 2011 Dirty Secrets report revealed phthalates, synthetic musks, and allergens hiding in Glade.

To push SC Johnson to live up to its ideals of transparency, we released a spoof commercial, “Secret Toxic Chemicals from the SC Johnson Family to Yours,” that was viewed and shared by more than 13,000 women, and a spoof website, www.whatsreallyinsidescjohnson.com. We also teamed up with the advocacy group SumOfUs.org to deliver the cleaning product giant more than 51,000 signatures from consumers asking to know what ingredients make up the fragrances in the company’s scented products.

What It All Means 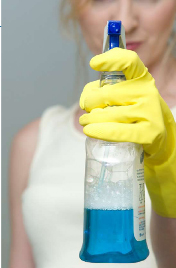 So this is why, when SC Johnson made their landmark announcement of full fragrance disclosure in response to the tens of thousands of women who demanded it, we celebrated this massive win across the country together.

We celebrated not just because of the announcement itself, but also because of its implications. SC Johnson just blew away other companies’ arguments that full fragrance disclosure is impossible. Not only is it possible, companies that continue to keep ingredients secret look like they have something to hide. Other companies across industries will no doubt follow SC Johnson’s lead if they want to keep consumer trust and loyalty, and ultimately increase their bottom line.

The other implication is that along the path to full disclosure, companies are also cleaning up their products before actually revealing ingredients, resulting in the removal of phthalates and triclosan from many major companies’ products, synthetic musks from Clorox and Reckitt Benckiser products, and other toxic chemicals that harm women’s health.

We’ve reached the beginning of the end of fragrance secrets. A huge and heartfelt thank you to all the women who raised their voices to protect our health and secure our right to know. You did it!